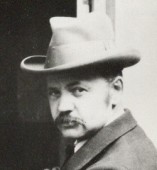 Born Pathhead, near Kirkaldy, Fifeshire, Scotland, 8 November 1855. Raised Edinburgh till 1868, then London where he became apprenticed to a chemist. Lived from 1877 in Eastry (Kent), where he married and practised pharmacy till 1886, relocating then to Brighton's twin town of Hove. There he again practised the chemist's trade and sold photographer's supplies. He took up lantern photography as a hobby and, as an avocation, showmanship at local functions. His first exposure to cinematography was through a circle of friends and neighbours which included photographer and inventor William Friese-Greene, pioneering cinematographers G.A. Smith and Esme Collings, and machinist and engineer Alfred Darling. These associations would prove decisive for him. His first experiments in cinematography date from 1894, his first viable films from 1897, but he went seriously into the film business in 1898 with a camera he invented with Darling's help. In October 1898 he issued a brief catalogue of films, and a longer catalogue a year later in which he encouraged other exhibitors to show films in groups with a unifying theme, a fairly novel idea at the time for film exhibitors though not for lanternists.

His views on the proper use of the new medium were emphatic, personal and prophetic of the direction it would take. He was one of the chief pioneers of the film narrative, beginning with faked news items such as Attack on a China Mission (January 1901) in which he became the first filmmaker to cut from one shot to another for dramatic effect introducing a primitive form of the race against time. In Stop Thief (October 1901) he introduced the movie chase of more than one shot (this one, a comic, had three); Fire! (October 1901), in which a family saved by an efficient crew of firemen, is the earliest film in which narrative action is moved along by a logical sequence of cutting from shot to shot. He recruited his actors from his family and friends, and acted in many of his own films. In 1902 and 1903 he laid the foundations for movie realism with a trio of brief narratives about the hardships war creates for the dependants of soldiers: The Soldier's Return (June 1902), A Reservist Before and After the War (December 1902) and Wait till Jack Comes Home (September 1903), stories of Dickensian pathos and social awareness. With The Deserter (October 1903) he moved in the direction of melodrama with a tale about a soldier forced to desert his unit in order to be at his father's deathbed. His output as a filmmaker was never large by the standards of his time. Usually involved in several activities at once, he devoted much of his energies to an exhibition service which gave shows in institutions and private houses throughout Sussex. No doubt because of it he was one of the earliest filmmakers to give serious attention to the problems of exhibiting movies first as a lecturer in the magic lantern mode and in 1902 with a highly successful experiment in intertitling, A Reservist Before and After the War, which however seems to have met with opposition from conservative exhibitors and was never repeated.

He invented and advertised in December 1908, a device with which exhibitors could make their own intertitles, and in 1910, the year in which he began to concentrate on the manufacture of film equipment, he patented a projector which could intersperse slide titles into the films it showed. Williamson continued to make films till 1908, when he transferred his production duties first to Jack Chart and then to Dave Aylott, but in September 1909 he shut down commercial film production altogether and, shortly after that, his exhibition service. Always attracted to documentary, he now announced a series of informational films on scientific and nature subjects, an undertaking which failed in the early months of 1910. After this his activities centre in and around London. He revived production after a fashion in 1913 for a newsreel service which, however, failed in the early months of the World War. Already in operation by this date were a film processing plant at Barnet and a film equipment works at Willesden, where the famous Williamson camera was made, in addition to multi-lens turrets, printers, rewinders, developing apparatus and footage gauges which were widely used in the British film industry, and a variety of specialty cameras, notably a pioneering photogrammetry camera for scientific and military use, a photo-finish camera for horse-racing and a gun camera which photographed the air battles of two World Wars. Twenty-five years after directing his last film, he died of a heart attack at his home in Richmond, 18 August 1933.