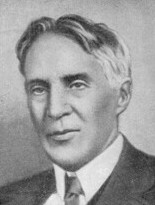 Born in Massachusetts, Wood studied at Harvard and Berlin before teaching at the University of Wisconsin from 1897 to 1901, and spent the remainder of a distinguished career as professor of experimental physics at John Hopkins University, also working on the Manhattan Project in 1940. It was while at Wisconsin that Wood's name became temporarily linked to the history of cinema. At the time he was studying the propagation of sound waves and their reflections from surfaces, and he wanted some way to demonstrate the results. 'It occurred to me', he told the Royal Society in February 1900, 'that a very vivid idea of how these curious wave-fronts are derived from one another could be obtained if a complete series could be prepared on the film of a cinematograph, and projected in motion on a screen'.

Wood had previously taken still photographs of wave fronts using spark illumination, but, finding it impossible to control the precise timing of the sparks, he was forced to abandon direct cinematography of the waves. Instead, a series of about one hundred drawings were made, based on the stills, showing the various stages of a wave's progress, and these were then photographed separately on a film, 'by means of the animatograph, which Mr. Paul has most kindly placed at our disposal'. (It is unclear to what extent Robert Paul was personally involved in this project). The results could then be projected, so that, 'we can actually see the wave going through its gymnastics'. In this way Wood was using a kind of cartoon animation, and, as the work must have been done some time in 1899 this makes him one of the earliest animators in film history. His method, which involved using a pin frame to line up three or four sheets of paper on which successive drawings were made, has something in common with later cel animation techniques. Wood's colleagues in this work were Max Mason (1877-1961), later physics professor at Wisconsin, and Professor Albert Brown Porter (1864-1909) of the University of Chicago. Porter seems to have been responsible for at least one of the three series of drawings which were made. As well as being an ingenious experimenter, Wood was also a talented artist, musician and writer, who published a volume of illustrated nonsense verse in 1907, and perhaps it was this fusion of artistic and scientific talents which gave rise to his pioneering work in film.